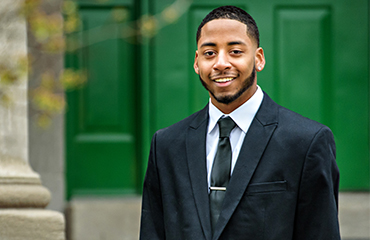 Tuition is on the rise nation-wide and the Pittsburgh Promise gave me access to higher education. Five years ago I was an at-risk youth growing up in the Homewood area of Pittsburgh who couldn’t afford college. The idea of pursuing an undergraduate degree was too far-fetched to consider. However, the Pittsburgh Promise assisted me financially through housing and books. It also allowed me to focus on my career instead of thinking about how I would repay my student loans. Because the Pittsburgh Promise removed financial barriers, it made my education and career goals easier to obtain.

With the Pittsburgh Promise supporting my educational journey, I was able to attend many institutions in the state of Pennsylvania. Through the extensive research and school visitations, I decided on Clarion University as my best fit. The Pittsburgh Promise helped me because it funded the majority of my four out of five years at Clarion. Choosing Clarion combined with the Promise, I was able to leave the university with less than $15,000 in debt.

I’ve become a student who has won many awards, started two mentoring programs, and lead students to become student leaders. I am convinced students can succeed, as well as find themselves at Clarion University, just as I did.