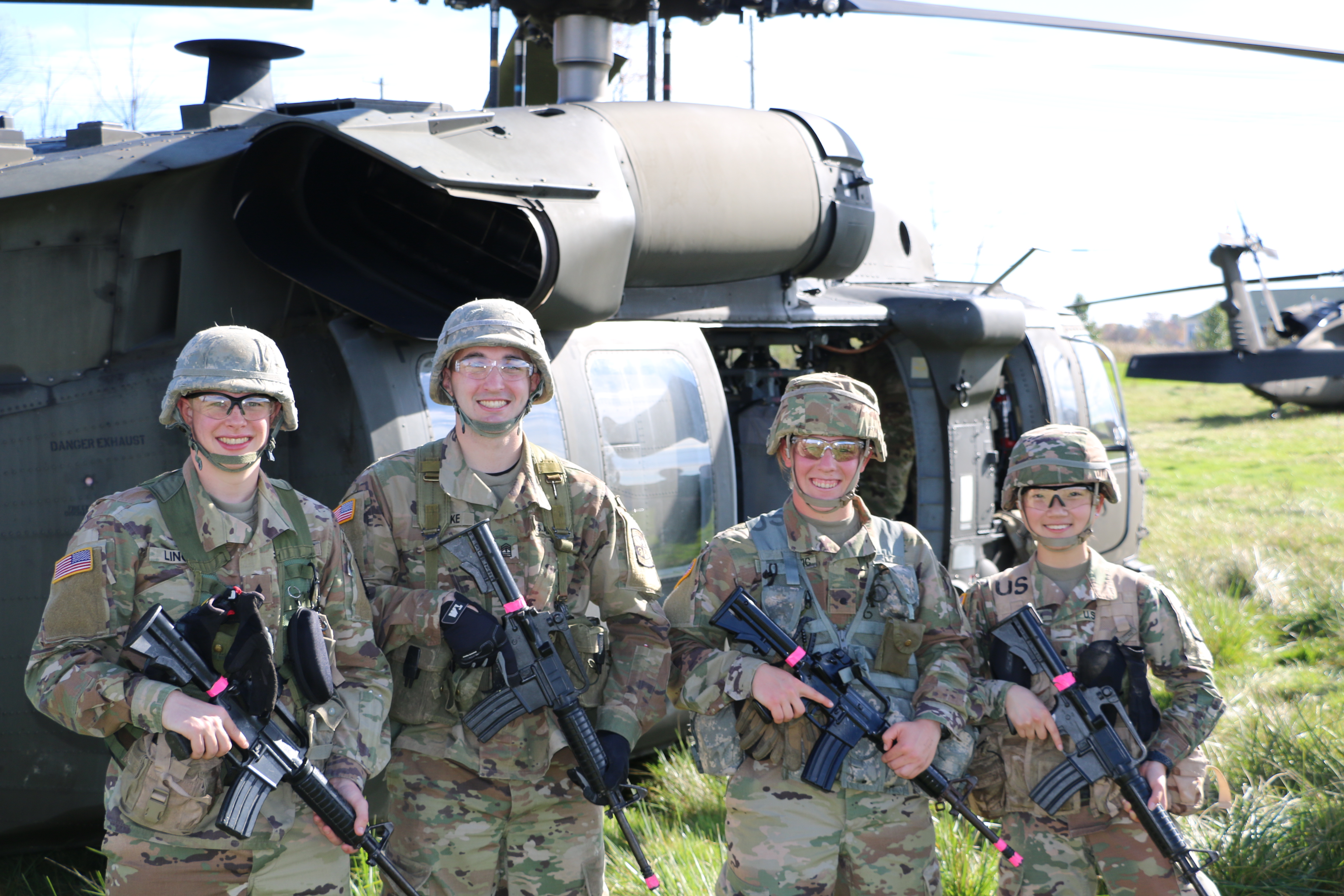 Courtney Kosanovic (second from right in a photo taken in November) is just one of many cadets who plan to carve out a future for themselves after college by enrolling in the Reserve Officers’ Training Corps. After college, she has committed to serving eight years in the Army. She and other cadets attended a training last weekend at Camp Garfield in Ravenna, Ohio. In the photo below she discusses her future plans while awaiting a UH-60 Black Hawk helicopter ride to Camp Garfield.

Some students just know what they want out of their college experience, and for Clarion student Courtney Kosanovic, enrolling in the Reserve Officers’ Training Corps, better known as the ROTC, firmly aligned with her values, athleticism and career goals upon graduation.

Kosanovic is a junior nutrition and fitness major, who, in addition to serving in the ROTC, is a three-sport athlete in cross country, swimming and track where she runs in the 3000-meter steeplechase event. 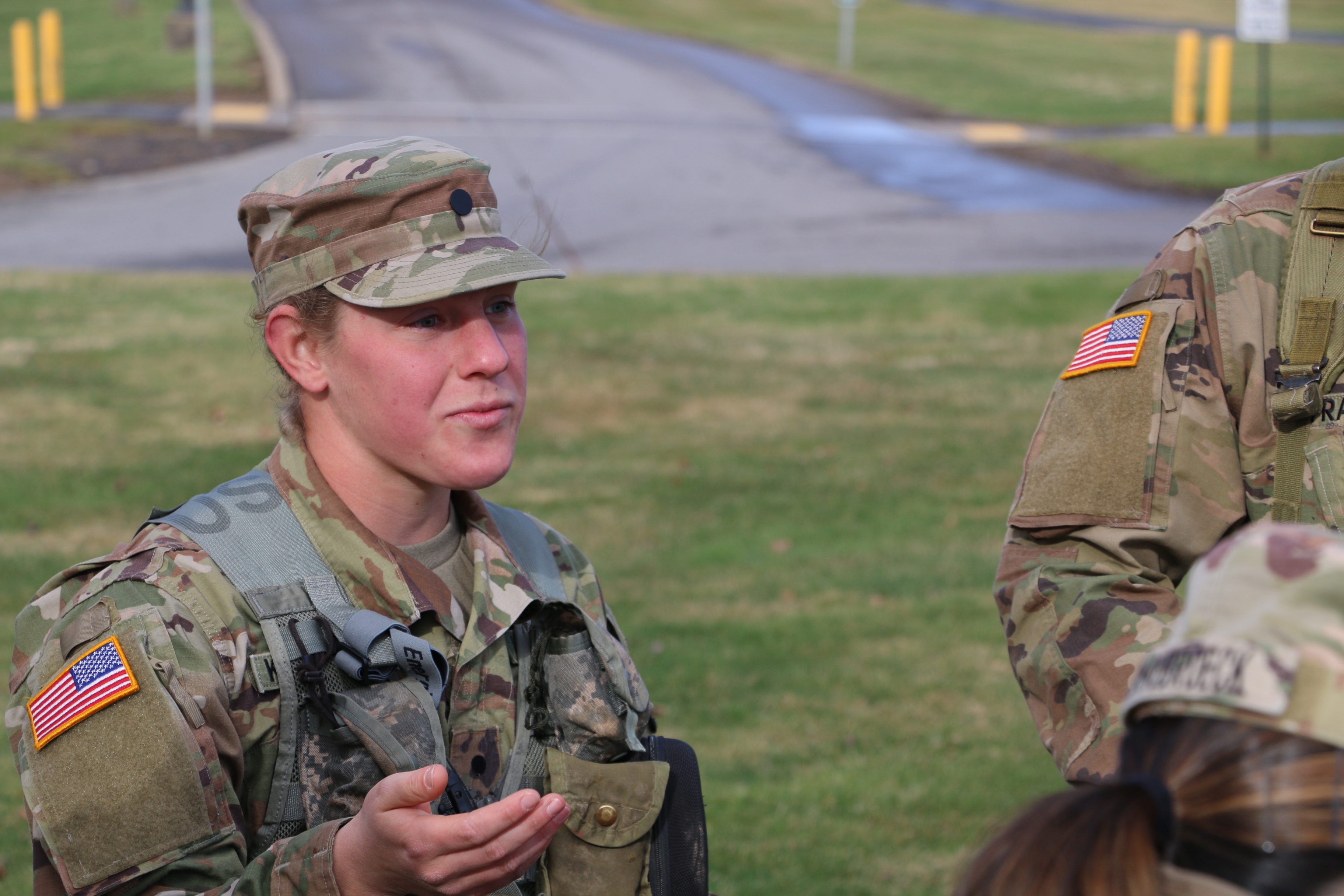 She believes all of her activities and her major help her excel in the ROTC.

Her sports activities keep her in top physical condition, while her nutrition and fitness major fuels her mind with the right knowledge to stay in good condition, she explained. The steeplechase event, in particular, is not unlike Army obstacle courses, as she jumps over 28 dry barriers and seven wet barriers – meaning she jumps into a water pit.

Kosanovic recognizes that her commitment to the ROTC, three sports and school work leaves her with little down time, but that's just the way she likes it.

"I think it definitely helps to keep a regimented schedule," Kosanovic said. "I'm not your average Joe. I'm not into partying."

When she wants to unwind you can find her outside.

"I just go out for a walk in the woods," she said.

The power nap is her other secret to success. Her cross-country coach expects her to report daily naps to ensure she is resting enough.

Her family also is a large source of support. Her identical twin sister, Caitlin, enlisted in the Navy after high school and is stationed in Japan as an air rescue swimmer. Caitlin is 15 minutes older than Courtney, but Courtney swears they were never competitive with each other. Their shared interests only served to make them closer – so much so that Courtney hopes her first salute as a newly commissioned officer is with Caitlin.

Kosanovic's devotion to her sister is apparent, saying that Caitlin is in a male-dominated specialty in the Navy, but has earned the respect of her peers, and even those ranked above her.

Kosanovic said her parents are proud of their daughters' choices to be in the military even though their mom worries about them.

When she graduates, Kosanovic is committed to serve for eight years and is competing for active duty in the Army. She is interested in three branches of the Army including infantry, field artillery and armor.

Her direction in the Army is helped along with training events like the one ROTC cadets participated in last weekend at Camp James A. Garfield in Ravenna, Ohio.

"Advanced Camp is a 31-day training event that is designed to assess a cadet's ability to demonstrate proficiency in basic officer leadership tasks. Cadets are evaluated on their ability to lead at the squad and platoon levels, both in garrison and tactical environments. Cadets are mentally and physically tested during a 12-day, consequence-driven field training exercise that replicates a combat training center rotation. Successful completion of the Advanced Camp is a prerequisite for commissioning," according to the Advanced Camp website.

Kosanovic had a chance to participate in an enemy role at Fort Knox last summer (where she had one confirmed kill) and is excited to participate this summer as a cadet.

The exercise at Camp Garfield is a scaled-down version of what cadets can expect at Fort Knox.

"While at Camp Garfield, Clarion Cadets executed tactical patrols including raids, ambushes and reconnaissance patrols as a vehicle to assess their leadership abilities under austere conditions," Perez said.

Because cadets may sleep outside, they pack their rucksacks with a list of required items and anything that may help them deal with the elements, including extra socks or hand warmers.

For Kosanovic, she packs extra snacks to eat before she goes to sleep. Being a nutrition and fitness major, she knows that the snack gives her energy which gives her more body heat to get through the night. 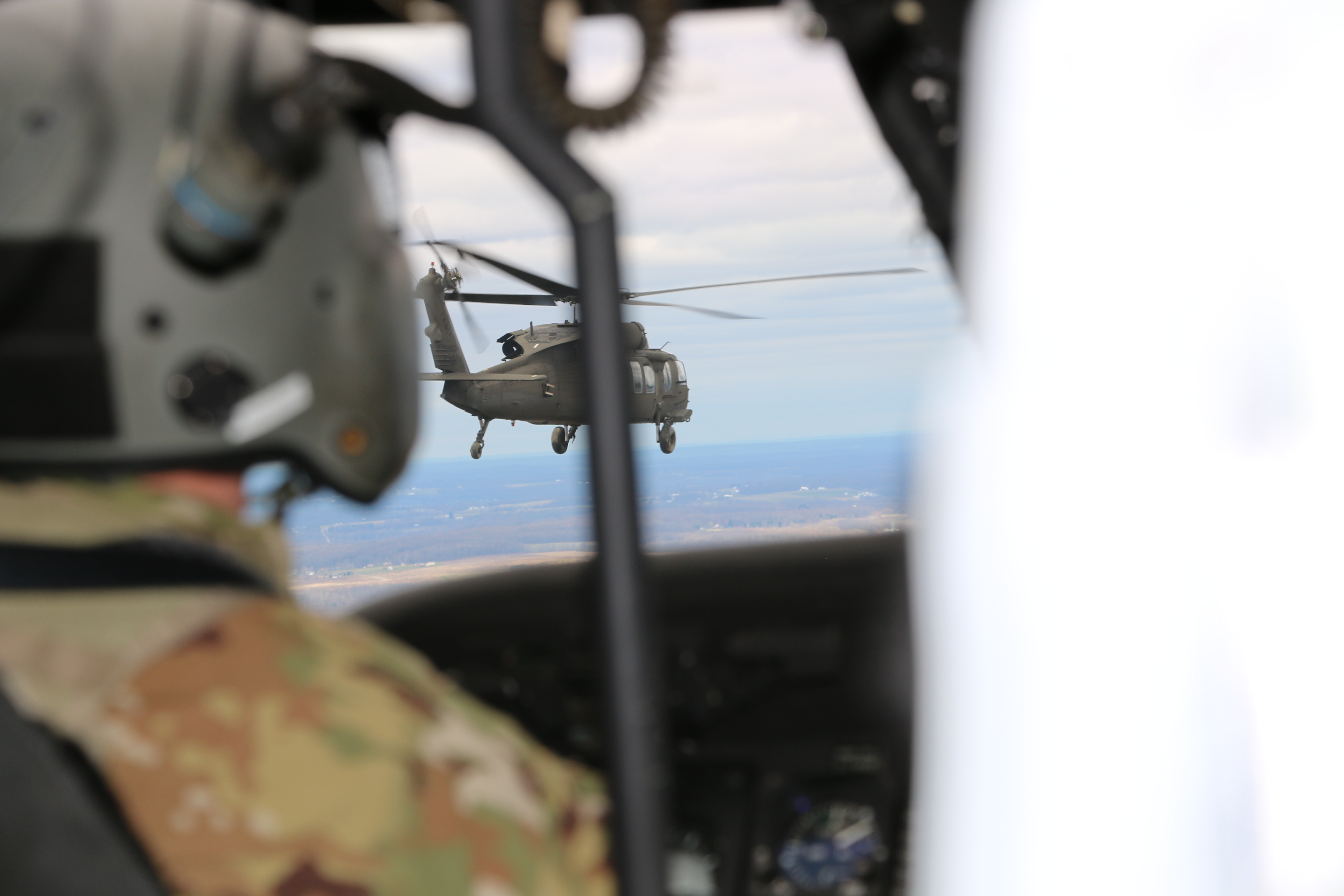 Clarion and Slippery Rock students were transported to Camp Garfield in style – via UH-60 Black Hawks.

Sgt. 1st Class Benjamin Turgeon served as crew chief on one of the choppers and said the flights were expected to travel approximately 2,500 feet high at a speed of 120 knots, or 140 miles per hour. He also spoke to the cadets about boarding and exiting the aircraft and the customary speech about sickness. He implored them to throw up in their shirts if they got sick. He also warned them that it would be a choppy ride due to heavy wind conditions.

"The UH-60 Black Hawk helicopter is the U.S. Army's primary medium-lift utility transport and air assault aircraft," as reported by Military.com. "The A model was designed to carry 11 combat troops in addition to a crew of three (pilot, co-pilot, crew chief) and was intended to serve in utility, air assault, medevac, command and control, and reconnaissance roles. The Army began converting Black Hawks to the medevac role in 1981."