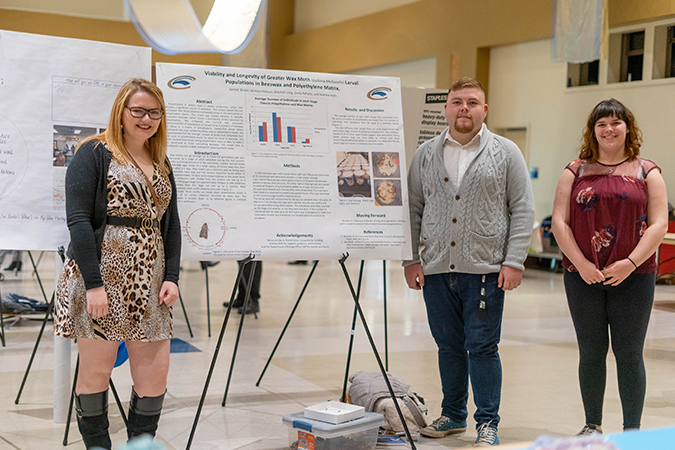 (From left) Jasmine Hobson, Gerald Bickel, Emily Rahalla and Mitchell Long (not pictured) have supported their hypothesis that the Greater wax moth larvae will eat polyethylene, which is used in plastic production.

What if the solution to the world’s plastic woes is only an inch long and typically found at the end of your fishing hook?

In their abstract explaining their research, which took two years, the students wrote, "This insect was chosen because it typically consumes beeswax, which shares a functionally similar structure to polyethylene."

The end result – they were right.

"Our data showed that larvae eating polyethylene were as likely to make it to adulthood as those consuming beeswax. This means that G. mellonella (the Greater wax moth) may be a viable method for reducing plastic waste," their abstract stated.

The implications of something like this could be huge for a planet that is literally swimming in plastic in places like the Pacific Garbage Patch and in landfills.

The idea is that the worms would most likely eat the plastic in a controlled environment like a recycling center, Bickel said.

The students explained the worms could then be fed to chickens provided there is no toxic by-product from the larvae eating the plastic.

"We in turn eat the chickens. We would be eating our own waste," Hobson said.

The worms could be ground up into flour should there be a food scarcity problem, which is another aspect of how the worms, or insects like them, could benefit the environment.

Keth said he has also been interested in raising maggots from the blood from the beef industry. Those insects could be fed to chickens, which is a better source of protein than corn, the usual chicken diet.

Bickel said there is a similar hypothesis that mealworms can eat Styrofoam. "They eat everything," he said.

So how soon before this type of research could be implemented?

"Given the right progression in the research, it could be in the next decade," Bickel said.
Bickel said similar work, which originated in Spain, is ongoing at other institutions, but most of those studies center on the enzymes inside the worms.

Since they've been successful at supporting their hypothesis, the group isn't worried about someone stealing it. Keth said when they first began their research he was protective of it, but now he just wants the work to continue for the betterment of society.

"We really care about the end product," Bickel said.

"Bait shops treat them with a substance to make it hard to breed them," Keth said.

In other words, buyers continue to come back for more bait.

The group managed to get the first generation to reproduce in order to have a batch of worms they could use in their research. The Greater wax moth has four stages including egg, larvae (worm), pupae/cocoon and adult moths. The group wanted the moths to, at least, get to the cocoon stage.

The larvae's breeding ground is a storage container filled with bran, honey and glycerin to help them move through it.
Once they had larvae they could research, they separated them into cups at 15 larvae per cup. The cups also were divided into two groups – those that were fed beeswax and those that were fed tiny plastic pellets.

Each day the students would count the number of larvae in the cups or note if any had died. They recorded any findings directly on the cup so there wouldn't be any mix-ups of information.

Time wasn't always on their side as they had to plan their research around school breaks and responsibilities.

"That was a big problem when we first started," Long said.

The cycle of a Greater wax moth is typically 49 days depending upon the temperature of the room, Hobson said.

While not as many plastic-fed larvae made it to adulthood as the worms who ate beeswax, Hobson said that's not really a problem because they still ate it and it's not a bad thing to have fewer worms around that are typically considered to be a pest.

But to Hobson they're not pests or gross.

"I call them my babies," Hobson said.

Getting past the stigma of working with insects will enable student research like this to continue. Keth said it's not hard to convince students to work with animals because they're cute, but insects, that a have a tendency to escape, is another story.

"We were pretty successful this time," Hobson quipped about keeping the worms contained. Later in the interview, one of the larvae was found on the windowsill, as they are excellent climbers.

The good news is their research was confined to a room in the Science and Technology Center that no one else uses. But the hope is that more people will join Rahalla in that room next year as she continues with this research as Bickel, Hobson and Long are graduating this May.

"This is the stuff that gets them jobs and internships," Keth said.

It might even be research that saves the planet. 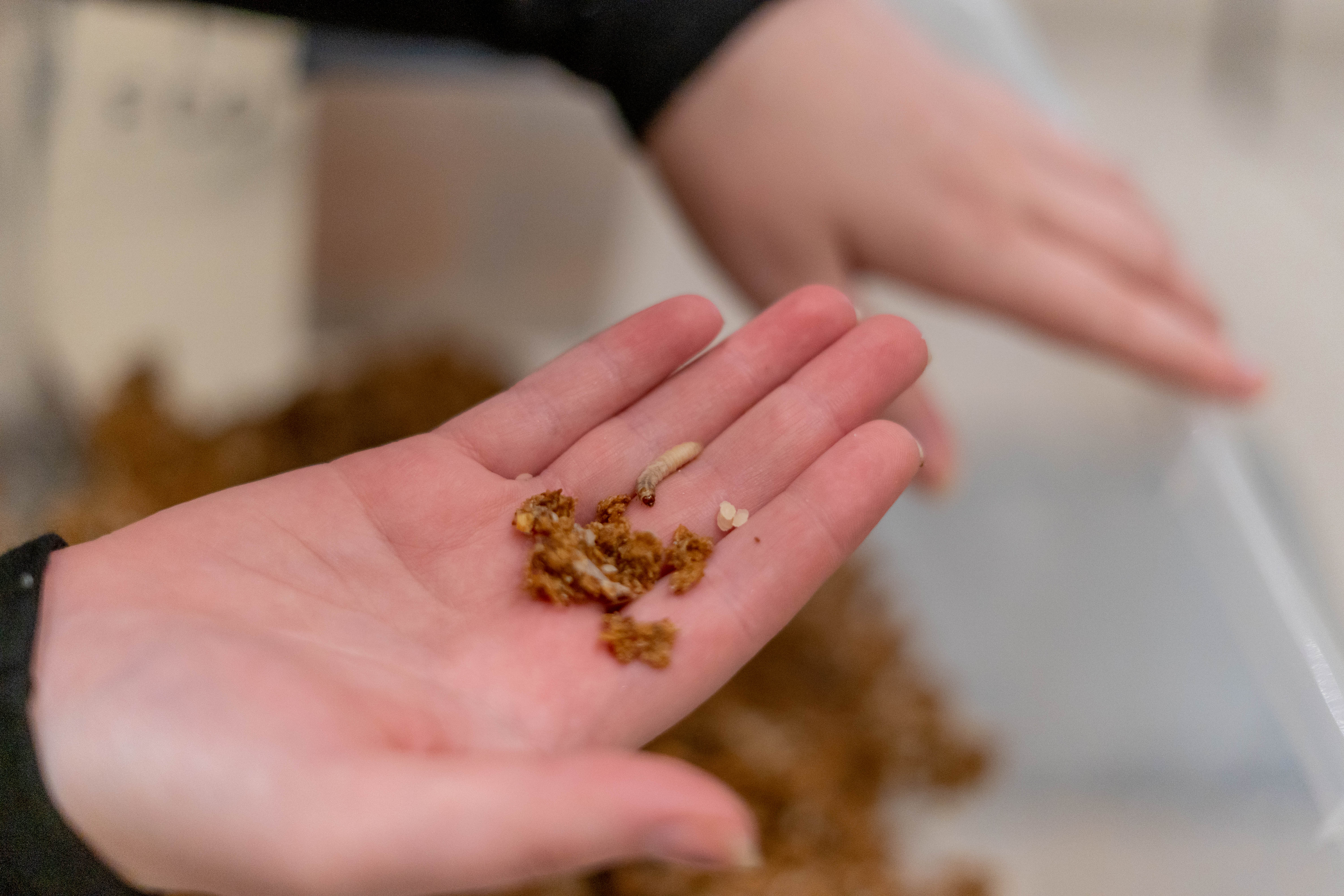 Normally found at the end of a fishing hook, the Greater wax moth larvae might just be the solution the world needs to end the plastic crisis.