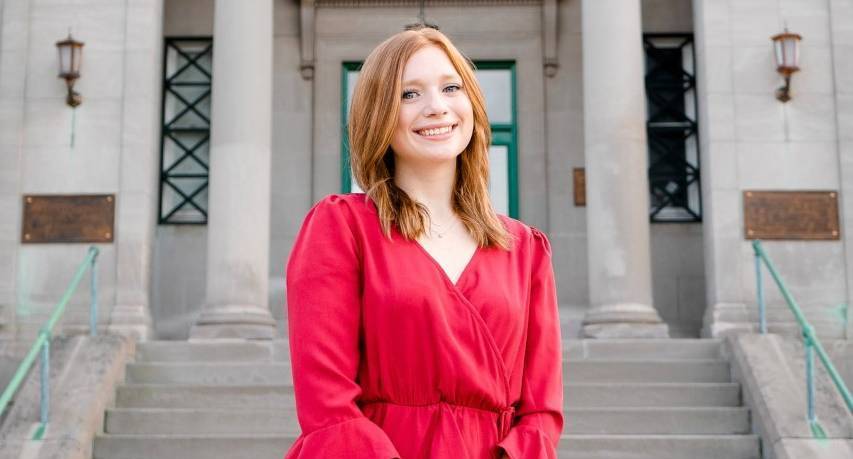 Out of the huts of history's shame
I rise
Up from a past that's rooted in pain
I rise
I'm a black ocean, leaping and wide,
Welling and swelling I bear in the tide.

Leaving behind nights of terror and fear
I rise
Into a daybreak that's wondrously clear
I rise
Bringing the gifts that my ancestors gave,
I am the dream and the hope of the slave.
I rise
I rise
I rise

The Maya Angelou poem "Still I Rise" is an indelible part of Cassie Schwalm. She identifies so strongly with it that she has it permanently inked on her body.

Angelou's and Schwalm's pain came from different circumstances in different times and places. Their response to it, however, was the same: They rose.

"My parents passed away when I was two months old," Schwalm said. "My grandmother raised me until I was 12, and she passed away."

Schwalm became a ward of the court. She had half-siblings and bounced around among them and other family for a while.

"I never found a stable environment until I was in ninth grade. I was placed with a family and stayed until my senior year," she said.

The family had guardianship of her, which made her essentially their child. The arrangement provided food and security for Schwalm, but she said there was verbal and physical abuse. She wasn't happy in the home, but she had created a life for herself at school and with friends, and she didn't want to go back into the foster care system.

"Academics is the only area where I found success. I flourished in English and literature, and I found passion in public service," Schwalm said. "I was involved in student government, the National Honor Society, I played multiple varsity sports. It was my friends and their parents who took me to practice."

She left that foster home the day she turned 18. She never looked back.

In spite of the misfortune that had been thrust upon her, Schwalm was determined to create for herself a bright future. She knew that the path to the kind of life she wanted was through higher education.

"I wanted to be more than what I had been reduced to in my teenage years," she said. "I knew I was more than the horrible cards I had been handed."

Although her AC Valley high school grades were excellent and her academic resume showed her to be a well-rounded student who was sure to succeed in college, she found it difficult to get into college because of her background and her status as an independent student.

"When I turned 18, I didn't know my Social Security number. I didn't have my birth certificate, and I had never had a job," Schwalm said. She didn't know how to access the documents she needed for admission and financial aid.

Again, her friends and their families were her support system. They, along with a "very good admissions counselor who had dealt with kids aging out of foster care" helped her to eventually gain admission to Edinboro University.

"I fought hard to get into college. That encouraged me to base my career on helping other foster kids who age out of the system to find the resources they need," Schwalm said.

After one semester at Edinboro, she transferred to Mt. Aloysius College to play volleyball, remaining there until the spring semester of 2020.

"Once COVID hit, I transferred home to Clarion. It was the most financially responsible choice," she said. "I did it with remorse at first, but it turned out to be the best decision I ever made."

Schwalm said before she transferred to Clarion, she loved the idea of going to college. She loved classes and learning, but she lacked a personal connection at Mt. Aloysius.

"When I came in, I knew what I wanted to do with myself – I knew what my goals were – but I didn't know how to get there," she said.

That changed in her first semester as a Clarion student.

"Dr. Lingwall was one of my professors, and right off the bat he took interest in me," Schwalm said. "Even though classes were over Zoom, he showed personal compassion and directed me to Lacey Fulton."

Fulton became her academic advisor. She suggested Schwalm consider pre-law and urged her to visit the Center for Career and Professional Development. There, Erin Kriebel Lewis connected her with the people on campus who could help her reach her goals.

"I knew when I took my first law class that it was the missing piece," Schwalm said.
She is taking full advantage of opportunities at Clarion.

"I got connected with Dr. Kevan Yenerall, and I mentioned that I wanted an internship. He got me in touch with the Jill Beck campaign, and the next week I had my first internship," she said. Yenerall helped her secure her second internship – with John Fetterman's campaign for senate – which she is completing now.

"This little support system grew in front of my eyes," Schwalm said. "People here cared about me more than anyone in my academic history. I wouldn't be in the position I am without those four. I have found the community I've been searching for."

With a lifelong interest in politics and the experience of two political campaigns under her belt, she is running her own campaign for a seat on Clarion Borough Council.

"Coming out of foster care as an individual who had to come into adulthood quickly, I understand the weight of political policies. I have the understanding that as a citizen of this community, state, and country, I can lessen that weight on someone else's back," she said.

Schwalm will graduate in May 2022. She plans to take a gap year filled with professional paralegal experience, study for the LSAT and start applying to law school.

"My goal is Columbia or NYU Law. From there, I'll start a career in public service."

Despite the challenges Schwalm has faced, she's never felt like quitting, especially where her education is concerned.

"The idea of not being a student is more terrifying than anything. I love being in school. My dreams of helping other students in similar situations has kept me going," she said.

She admits to struggling with a victim mindset when she was younger, but going to therapy, finding her community, and identifying her passions helped her develop the mindset to rise above her circumstances.

"If anything, I'm proud of myself."