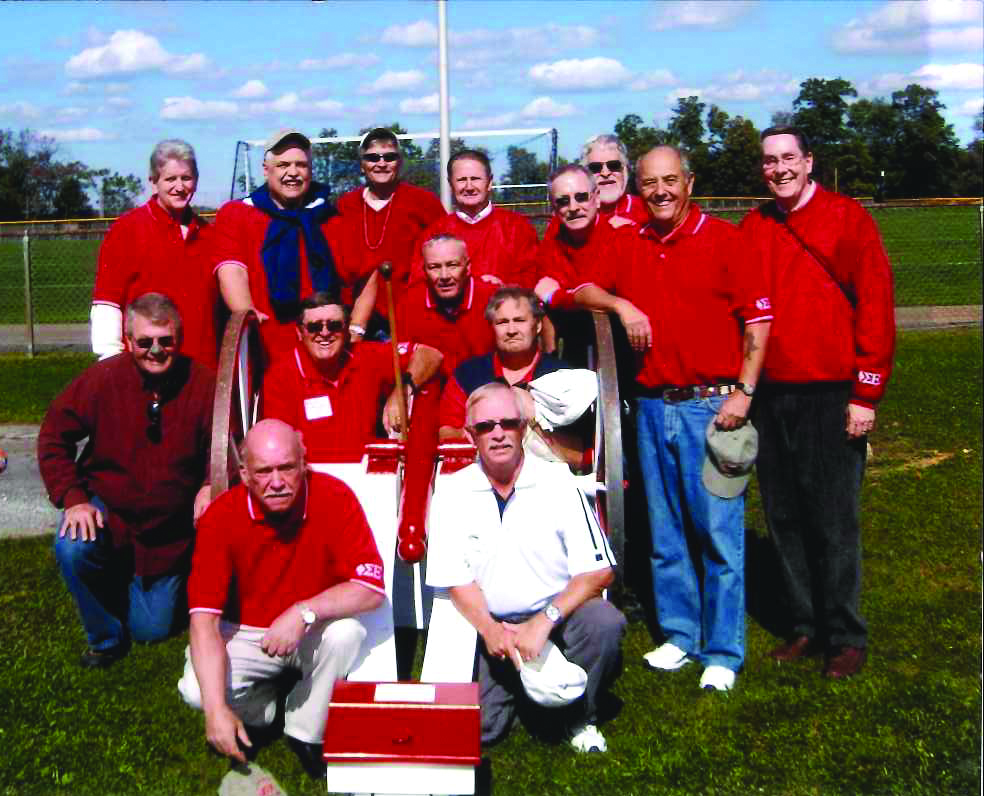 Phi Sigma Epsilon fraternity has reached another milestone at Clarion.

This spring, the fraternity’s scholarship reached full endowment status in order to serve Clarion students. The criteria for the scholarship is still being developed.

In its heyday, Clarion’s chapter of the Phi Sigma Epsilon fraternity was, to put it in slang terms, da bomb.

According to brothers Larry McElwain and Clarence Tabler, Phi Sigs were leaders on campus in the 1960s. Members were athletes, scholars, musicians, and “regular guys.” Their frat house, at the corner of South Street and Seventh Avenue, complete with house band “The Count and the Valiants,” was the place to be.

Phi Sig chapters across the country were noted for having small, carbide cannons, which would be fired at football games when the chapters’ teams scored; Clarion’s Phi Sigs decided to go big with their own cannon.

One of their frat house landlords owned Clarion Drilling and Blasting Company. Tabler directed the construction. Machinists fabricated a solid bar of steel into a barrel, drilled into it and welded a steel ball on the end. A small hole toward one end held a fuse. The brothers found some old wagon wheels and used them for the cannon’s carriage. They tested the cannon with varying amounts of gunpowder and wadding, seeking the biggest boom.

They debuted the cannon in the 1963 football season, celebrating touchdowns and field goals at both home and away games with an earth-shaking blast. The cannon became an integral part of game day and remained so until the late 1960s when a brother was injured in an accident while firing it. The college banned the use of the cannon and ordered it to be dismantled.

By the mid 1970s, Clarion’s Phi Sig chapter, too, was dismantled.

In 2000, brothers Jerry Marterer and Dale Richards ran into each other at homecoming. They shared a desire to reunite the fraternity and began planning reunions. More and more brothers became involved with the resurged group, but something was missing: the cannon.

Rumor had it that the cannon had been dumped into the Clarion River, but they followed up on leads, eventually finding the original barrel in Franklin. McElwain negotiated the purchase and took the barrel to his Georgia home and workshop, where he refinished the barrel and built a new carriage. Wagon wheels bought from the Amish completed the restoration. The cannon made its second debut in the 2006 homecoming parade.

The restored cannon has become a focal point of Phi Sig homecoming gatherings. Although it isn’t fired at public events, the cannon remains capable of the same earth-shaking blast as 43 years prior. It rides, along with its creators, in the parade every fall. Brothers walk alongside, handing to spectators red and silver Mardi Gras-style beads that symbolize, as the Phi Sigs’ red and white jackets did in the 60s, the unbreakable bond of brotherhood.