Hope rises out of the fog 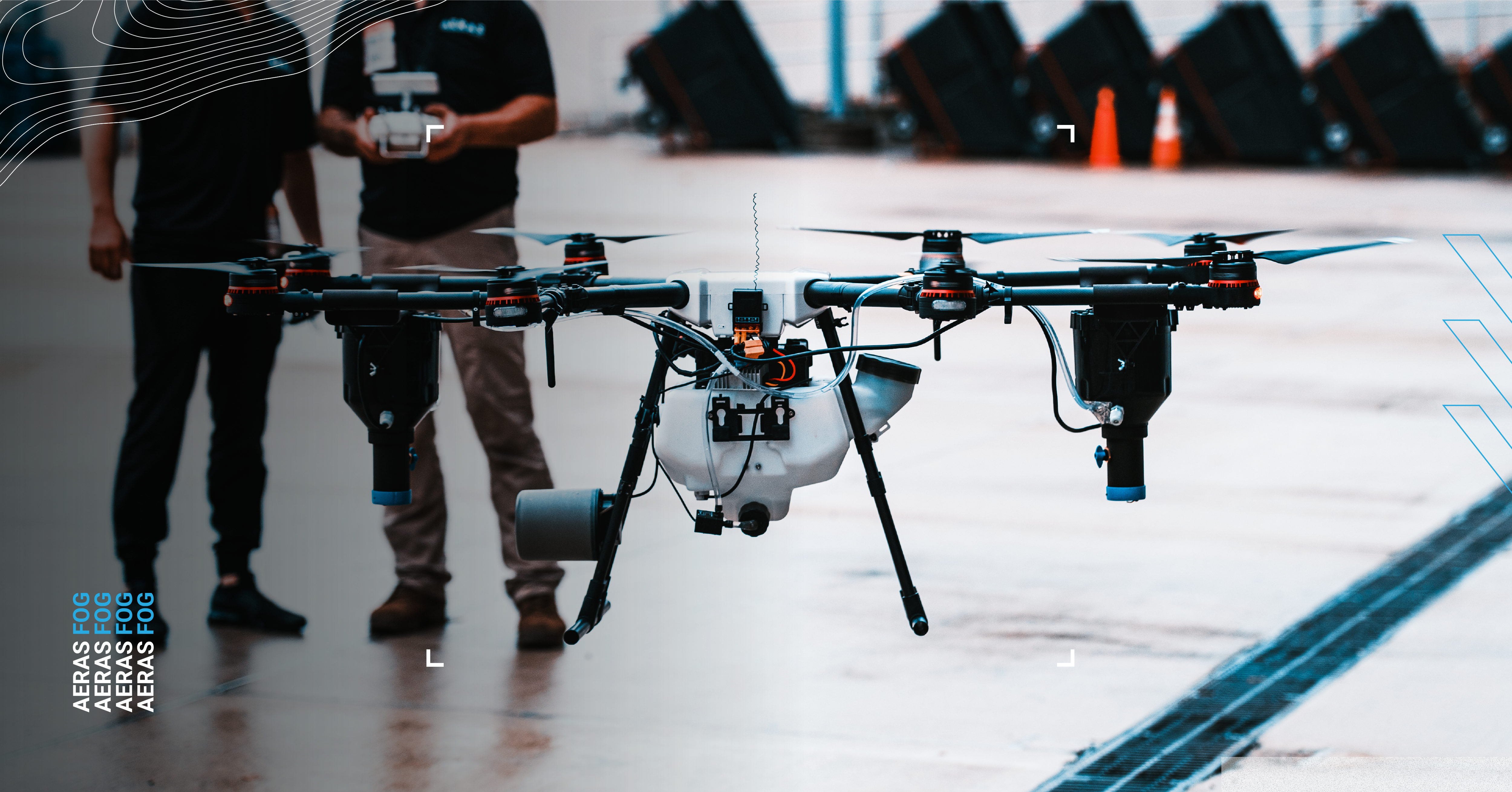 Aeras Fog Co. has found a way to combine two existing technologies for a faster and more thorough way to disinfect large-scale areas such as stadiums.

If the pandemic has given us anything, it might be more time or the opportunity to use our time differently, especially for those of us now working from home. Alumni Nick Brucker (’09) hasn’t let any extra time go to waste.

In fact, Brucker has seized the opportunity to foster his inventive and entrepreneurial sides during the past year as well as keep up with some hobbies. With Brucker, however, his hobbies usually have a way of becoming more than just side hustles, but full-blown companies.

Already the CEO and founder of Sparq Designs in Pittsburgh and Nashville, he randomly met Eric Lloyd in a Whole Foods and that meeting led to a friendship with big ideas. The pair developed the idea of combining electrostatic sanitization and drones for a solution to a major problem that hit when the pandemic did.

Their venture, Aeras Fog Co., uses electrostatic science with drones in order to sanitize large areas in a short amount of time – as little as three hours to disinfect an entire stadium.

"Right now, the most practical applications for the technology includes sanitization of large venues, stadiums and arenas as they pertain to the drone," Brucker said. "We are currently negotiating deals in the hospitality and agriculture space as well."

Aeras has sprayed for the Pittsburgh Penguins, PPG Arena, and for ASM Global.

According to the Environmental Protection Agency, "electrostatic sprayers apply a positive charge to liquid disinfectants as they pass through the nozzle. The positively charged disinfectant is attracted to negatively charged surfaces, which allows for efficient coating of hard nonporous surfaces."

Brucker explained in an interview on Fox News that this science eliminates human error by reaching places a person might miss.

The sky's the limit for such an invention, which could be used in any place people touch.

"Our plans with Aeras are not limited to drone sanitization, as we've released and developed commercial backpack units that will be effective in office settings, education, fitness facilities and more. We also have released a residential unit, called the Aerasmini that will be an exceptional product for at-home and inside of automobiles," Brucker said.

Developing ideas is nothing new to Brucker who challenged himself and the team at Sparq Designs to "build a brand from scratch and self-propel it into the market" in 2019.

The result was Aiden Ross, a golf glove and apparel brand.

"Our first go-to market product was the golf glove. I saw an opportunity in the space to enhance a current golf accessory that has remained stale for quite some time. We introduced a unique style and design component to a premium Cabretta leather glove."

The idea for a golf glove and apparel isn't surprising since Brucker was a golfer for the Golden Eagles during his time at Clarion and understands the requirements for this type of product.

The brand features Cabretta leather with unique design options on the inside thumb.

"We see golf as an outlet for individuals to express their personalities and style through their clothing and accessories. Golf and fashion have always gone hand in hand and we believed that the premium golf glove space was up for grabs. From a style standpoint, we've created a brand that will stand out, but at the same time be subtle," states the Aiden Ross website.

In addition to Aiden Ross and Aeras Fog Co., Brucker is full of ideas fueled by green tea, a little red wine and daily exercise. Brucker said he's up before 7 a.m. to prepare for the day. After work, he exercises for an hour-and-a-half and then heads back to the office to get caught up.

"After exercising, I will usually get back into work and filter through emails, proposals, and campaign work. At night, it feels like downtime to me and I think better – so this is where I brainstorm more. I usually get to bed around midnight," Brucker said.

He also carries around notebooks and utilizes the notes feature on his phones lest he forget an idea that might have legs. His ideas come from observations.

"I like to pay attention to people and trends and what is happening. I think that I have a pretty decent sense of what people want and what they are looking for. I think that my ideas are driven by paying attention to others and watching patterns evolve," Brucker said.

For now, however, he's focusing on what has already been built.

"At this point I am realizing that I am only one person and I need to harness my efforts to ensure success of all the companies," Brucker said.

Admittedly, he believes his work-life balance could use some attention and it's one of his goals in 2021.
One of those existing companies is Sparq Designs, which has hired Clarion graduates in the past and Brucker suspects will continue to do so in the future.

"I feel that we Clarion grads have a lot of grit. I think that in business this plays extremely well and helps us to deal with adversity. Our team of Clarion grads have all been great to work with and have helped build Sparq along the way. We understand what it takes to achieve our goals and we know what hard work is all about," Brucker said.

Brucker further explained that Clarion helped him develop his social and networking skills more than anything else did.

"I built a group of lifelong friends and people who I've been fortunate enough to build companies with. This is something that I don't take for granted. Jim Blundo (vice president and founder of Sparq) and I were friends at Clarion, and I have been fortunate enough to create one of Pittsburgh's fastest-growing companies with someone who shares the same drive and passion as myself," Brucker said.

Brucker's always had an interest in entrepreneurship, which was enhanced with a B.S.B.A. in marketing degree. His advice to anyone who wants to build or invent something is to "trust your intuition and do your research" and surround yourself with a team of people to help you execute the ideas.

"I've always enjoyed entrepreneurship, and I have been that way since I was a kid. I remember starting little businesses and having ideas for them since elementary school. In college, I realized that I really enjoyed the marketing and advertising side of business. This focus led me to start a design and web marketing firm in 2010. It allowed me to develop my skill set and start a business that would later evolve into Sparq Designs," Brucker said.