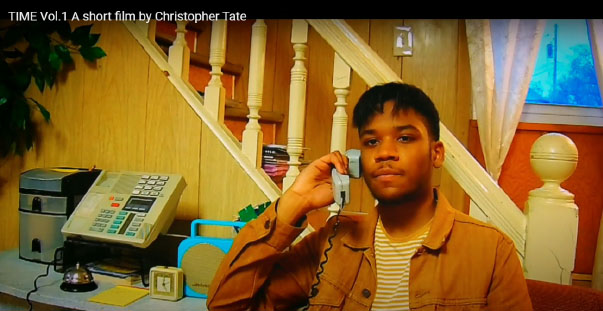 Clarion University student Christopher Tate, a junior communications major from Meadville, is getting a taste of fame with his very first short film, “TIME Vol. 1.” This summer, his eight months of film study, script writing and shot list composition paid off with “TIME” by being chosen as a finalist in the Los Angeles Independent Shorts Awards and as an official selection in the Experimental category of Montreal Independent Film Festival.

"Through my endeavors of filming, documentation, and publishing, I plan to create content based on the properties of film composition," Tate said. "To practice my film studies within the actual field, I've set out to create a series of short films in a collection called "TIME."

In this psychological comedy, a character named Wallace – portrayed by Tate – encounters a small, broken clock that appears to follow him everywhere. The seven-minute film was shot at Clarion University and Clarion Borough locations.

"The main message from my film can be drawn from many points, of always coming back to the same moment where you were before, to always considering the big picture when one tries too hard to run from the past," he said. "These themes will be explored in the sequel, "TIME Vol. 2."

Tate said the film was an exploration of combining music with storytelling to figure out why they coexist so well in the pursuit of creativity. He was inspired by 60s jazz broadcasts, as well as by Buster Keaton films and National Lampoon's Animal House.

"My main career goal is to dive into the creative world of subjective storytelling by working as a director, writer, composer, illustrator and overall content producer," Tate said. "I have a growing independent mobile studio under the name "TOAST STUDIOS," and I plan to continue learning new and interesting ways to perfect my craft."