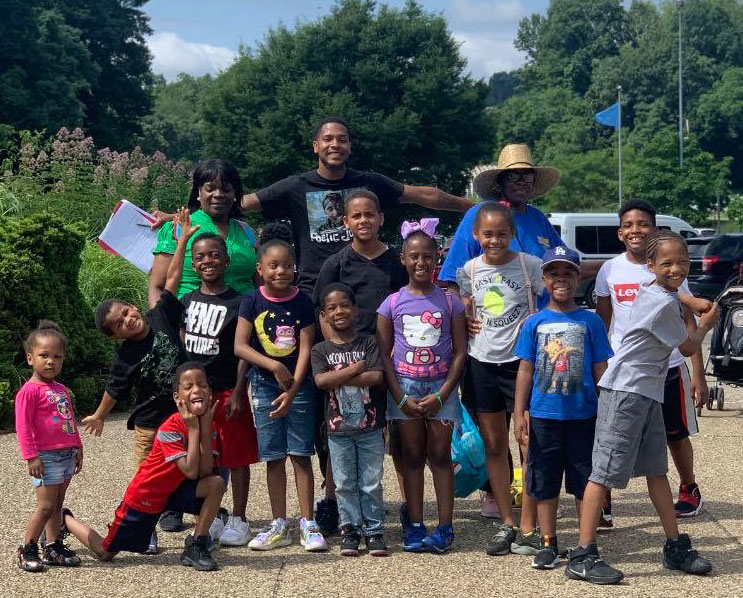 "I really wanted that college experience. Clarion was a little bigger and gave me the kind of campus feel I was looking for," Frye said.

He played football at Clarion and graduated with a degree in business in 2016. However, it was his sports experience, and particularly his experiences coaching youth sports, that really shaped his future.

"I've always liked working with youth, and I wanted to become a role model," he noted.

After graduation, he took on a position as a manager with a moving company but found the job simply didn't suit him.

"I didn't like sitting behind a desk, giving directions, and decided I wanted to use my gift for working with kids."

After applying for substitute teacher positions in some of the inner-city schools, he was offered a position at Arsenal Middle School in the Lower Lawrenceville neighborhood of Pittsburgh. While he enjoyed the work, he soon realized he wanted to do more.

"I had the beginning of a plan for a youth program three years ago, but I really came up with the program last year."

"A lot of these kids want to be better, but they just need someone to believe in them," Frye said. "It's good for them to see someone like me, a person who looks like them and grew up in the same area, because not a lot of people who come from where I was raised become successful. Success in a lot of people's eyes here is graduating high school. Graduating college – it's like you're almost a hero, and definitely a role model."

He first launched the program for middle school students, then expanded it to younger students. Along with tutoring and mentoring and activities, Frye noted the program also gives kids a chance to talk about their feelings and the issues they face.

"A lot of kids don't get much of a chance to express their feelings because they live in single-, working-parent households or just don't really have people to look up to and talk to."

Offering a safe environment for kids to discuss the things they're going through has been an important part of the program, Frye explained.

"We just talk a lot about life, the things people go through, and how to become a better person through it all."

While Frye started off strong and was already beginning to see many students making great strides, the COVID-19 pandemic threw things into disarray for a while. He didn't let that slow him down.

When the pandemic hit Pennsylvania and schools were closed, Frye was concerned about many of his students and their families who depended on things like school lunches. He immediately organized a program to deliver free lunches and care packages – many of which he delivered himself – to those in need in his area.

"I'm thankful I didn't catch COVID, but I wasn't really afraid, because I know what it feels like to be young and go hungry at night. That's what I was focused on."

Now, with Pittsburgh schools going remote for the beginning of the fall semester, he's focused on creating a new, socially-distanced version of the program.

"Ultimately, I want to open something up where they can come get help with things through this time."

Funding for his programs has been through fundraisers he's created, from a GoFundMe to a partnership with the Instant app for the care package program, to sales of "Secure the Kid" merchandise he created, which can be purchased through the program's website. He also regularly updates the program's Facebook page.

Along with the main program, Frye is also working on a community outreach program that brings Pittsburgh police officers and kids together for special activities.

Eventually, he wants to expand Secure the Kid beyond the Pittsburgh neighborhoods.

"I'd like to see this everywhere, not just in the inner city."

While the program he's creating grew out of his concern and care for youth in his own neighborhood, Frye noted that his time at Clarion University played a defining role in his life.

"Being at Clarion and being in such a different environment taught me a lot of life lessons, how to be on my own, and it helped me to grow into the person I am today."

In particular, Dr. Doug Knepp, his academic advisor, made a huge impact on him.

"He was a person I could just go talk to, and whatever I wanted to do, he was basically like, 'Just do it. Don't talk about it, just go do it.' He really helped me to believe in myself."

While many in-person activities are currently on hold, Frye says that he particularly looks forward to taking students on campus visits again.

"Clarion will be my number one. In the city, a lot of kids don't necessarily have the grades or the motivation to try to go to college, but once they get on that campus and get a look around, it can change everything."

Note: This story was written by Aly Delp '03, for her employer, Explore Your Town Media Group, which graciously permitted Clarion University to republish the story.