Your Degree at Work 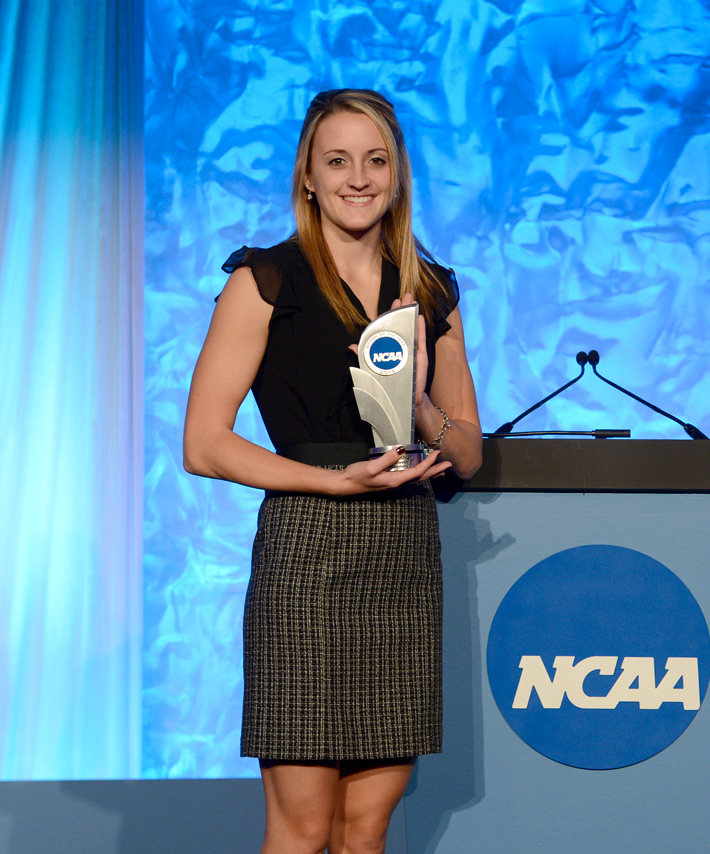 For Kayla Shull (’13), her moon and stars happened to be the speech pathology and audiology major and the women’s swimming program at Clarion University, even if she didn’t realize it at first.

“I didn’t end up picking my school until late in April of my senior season. Not everything was fitting. I liked one aspect – academics or athletics – of a school, but not the other. Clarion had everything,” Shull said. “It’s actually kind of funny because I said I wasn’t coming here at all. I was not going to come because it’s only 35 minutes from my house. But I ended up falling in love with Clarion.”

“I loved the coaches, Coach VanDyke and Coach Tilly,” Shull said. “And the speech pathology program, the fact Dr. McAleer knew my name in the first week, it was just right. You just know when it’s the right fit.”

The speech pathology program was so much the right fit, after graduating last spring, Shull decided to stay at Clarion to complete her postgraduate work in the field.

“I actually looked into a couple of other places,” Shull said. “But in the end I decided the thing I love about our program is that a lot of other programs are too competitive in the respect that people feel threatened that you are going to take their spots. It’s not a collaborative effort. Here at Clarion we all work together. We are a close-knit group. I know that’s what it’s going to be like in the field. You work with other professionals. To me that’s something that really appealed to me about Clarion over other graduate programs.”

Through her own life experiences, Shull knows the impact she can have on others.

“I knew I wanted to help people because I have had hearing problems all my life,” Shull said. “I have a hearing disability in my left ear. I really wanted to help people in some aspect of medical care. I think it gives me a level of understanding that I have that background. I get it from both ends: I get to see the end that helps, and I also get to see the end that receives the help.”

If success in swimming is any barometer, Shull should have plenty of success in her career.

In the pool, Shull was a 15-time NCAA Division II All-American while also winning four PSAC titles in the 100 backstroke, an event in which she holds the school record. She was a member of Clarion’s 2011 team that finished fourth at the NCAA Division II meet, while also being a part of four second-place PSAC teams.

Thanks to her work in the classroom, Shull, who graduated with a 4.0 GPA, earned numerous scholar-athlete awards as well.

In January she was named an NCAA Top 10 Award winner which recognizes 10 extraordinary student-athletes for their success on the field and courts, in the classroom and in the community. The award recipients completed their athletics eligibility during the 2012-13 academic year.

Shull was also a finalist for the 2013 NCAA Woman of the Year Award, for which nine nominees from NCAA Divisions I, II and III made the final cut.

“The Champion Scholar Award is probably one of the most meaningful (awards) to me because it showed I demonstrated success in both athletics and academics,” Shull said. “Overall, though, just being part of a great program and getting to share that excitement with so many different people, just being part of a family, is what I take most from my career. The academics and the awards are great, but in the end, it’s what you get from the program as a whole. That, to me, was the most important thing.”

“I definitely think my parents are big part of it,” Shull said. “It’s not that they made us get A’s or B’s or anything. But they didn’t let us strive for anything other than our best. I think that instilling that in me at a young age made me personally strive for success. I’m a perfectionist because of it. I wouldn’t have it any other way. It definitely started with them.”

Overall, Shull said Clarion was the perfect choice for her.

“The speech pathology program is wonderful,” Shull said. “It’s top-notch. You are going to learn, but you are going to have a lot of people learning with you.”

“If you are talking the swimming aspect, it’s really a great program. If you are looking at it from a historical perspective, we certainly have a name on the board. Coming to Clarion is the best choice I could have made. I am so happy I came here.”