Clarion University's Peirce Planetarium offers you a glimpse of the stars and planets of the night sky. It does so with its 40-foot dome, one of the largest in the state.

At the heart of the planetarium is a precision-engineered star ball that combines optical and electro-mechanical technology to provide an accurate view of the night sky and its apparent motion.

There are several shows that have become staples at the planetarium. They include:

The planetarium is named for Dr. Donald D. Peirce, teacher and chairman of the science department from 1932-68.

To schedule a show, please contact Dr. Sharon Montgomery at 814 393 1899 or by email at smontgomery@clarion.edu. 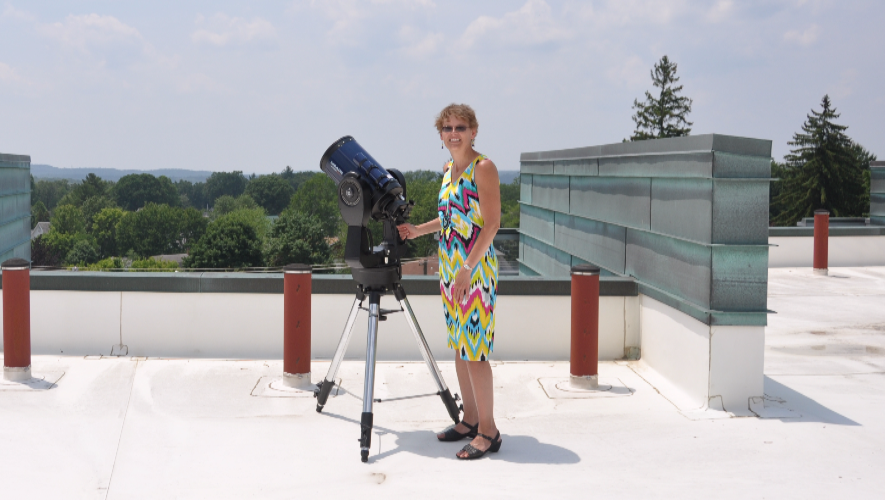 Even when she was a little girl, physics professor and astronomer Sharon Montgomery was mesmerized by space – specifically the stars in space.

She'd lie out on a football field in Middleport, N.Y, with her dad, now a retired chemist, and stare up at the stars.

She'd even look through his homemade telescope. Montgomery laughs as she recalls that it was a really poor telescope, but the equipment wasn't as important as the interest that it piqued.

One day Montgomery would look at those same stars with much better and more powerful telescopes at some of the premier observatories in the world.

Starting in 2010 at McDonald Observatory in west Texas and then later in South Africa, Montgomery and her collaborator, Barry Welsh of the University of California, Berkeley, would observe the same stars night after night. And during some of these observations, she and Welsh would make some discoveries that are quite literally out of this world.

They discovered many comets in several different star systems.

Discovering and studying comets is important because it answers questions about star formation and our own planet.

Montgomery said some scientists believe that Earth's water was delivered by falling comets.

Montgomery best explains the role of comets like this: Every solar system is a construction site, and comets are the debris left over at the site.

"We look for that subtle diminishing of light that changes night to night," she said.

The star systems Montgomery and Welsh were observing are "young star systems, so they're still kind of junky," only 10 to 100 million years old.

That may not seem very young, but the oldest stars in the universe are about 13 billion years old. The Milky Way (our home galaxy) contains stars nearly this old, too. Montgomery's star systems are young, even compared to the solar system, which formed about four and a half billion years ago. If the universe's oldest stars are octogenarians, the sun is a young adult, and Montgomery's "young and junky" star systems are infants, less than half a year old.

Montgomery and Welsh ascertained the comets they discovered had never been discovered before by completing an exhaustive literary search. Also, the list of stars possessing detected comets is extremely short – in the ball park of 15, Montgomery said. She and her collaborator have discovered all but about five of them.

Also, the presence of comets probably means that planets are forming, she said.

"Comets falling into the star are likely signs of a large, massive planet because, like planets, comets will generally orbit the star in stable, circular orbits. In the case of comets, they are generally expected to reside far from the star.

However, a massive Jupiter-like planet will tug on these more distant comets and occasionally pull them inward. Without at least one planet, it's hard to see why large numbers of comets would be on death marches toward the star," Montgomery said.

Montgomery said it's likely that these comets no longer exist since they probably fell into the stars. This also means these comets won't be given names.

Evidence of the large amount of debris once commonplace in our solar system can be found on the cratered face of our moon, she said. The rocky worlds in the solar system were absolutely pummeled by debris about 4 billion years ago. Today these comets are safely sequestered far from the sun in a space called the Oort Cloud, which may contain trillions of comets. Only rarely does a comet careen into the inner part of solar system now, and that's why comets like Halley's Comet are a big deal, Montgomery said.

In other words, our solar system has had plenty of time to clean up its construction site, reducing the number of comets we are likely to see.

"Most of the large bits of debris were swept up by the young planets as they orbited the sun," Montgomery said. "Gravity will also help to clean up a messy construction site since the star and any planets will pull debris toward them. Even if the comet does not fall into the star or the planet, a narrow miss is likely to change the comet's orbit so much that it will be slingshot right out of the star system."

She and Welsh, as well as another group in France, are currently the only scientists hunting for comets by examining starlight.

When viewing any star, Montgomery said the real magic is in the giant telescopes themselves, which bundle the faint starlight in such a way that we can see it.